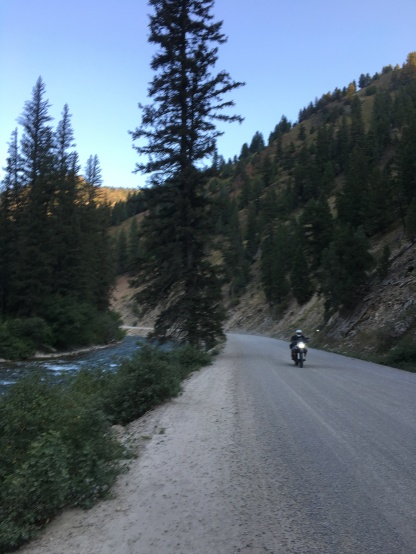 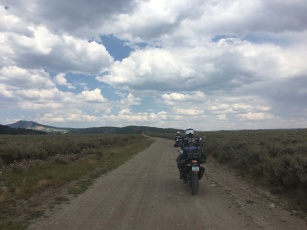 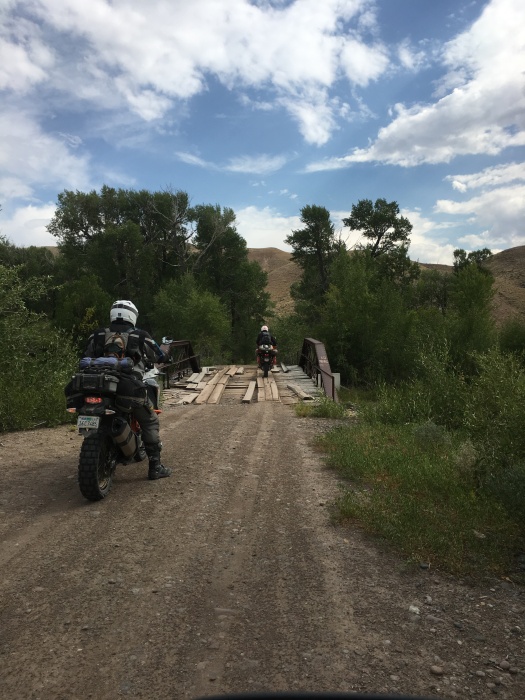 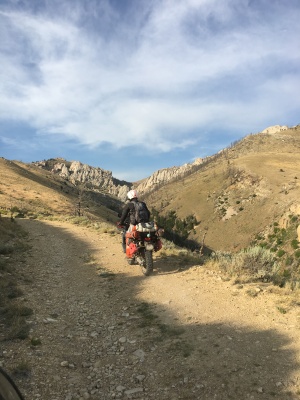 I can’t imagine a better ride. Today was completely bonkers.

We rode from Alipne, WY to Thermopopolis. The route took us across 4 separate mountain passes. I can’t name them at the moment.. I’ll come back later and edit this…Our max elevation showed to be 9,120 ft but we spent a whole lot of the day at altitudes where it was difficult to breathe. The morning was cold. Peter’s 1190 has a “freeze warning” dashboard light that kept blinking.. It was a big change from the past three days.

Pictures here show the terrain. What they can’t really show is how untouched the areas feel and how exposed that made us feel. This trip really felt like a bigger deal today. 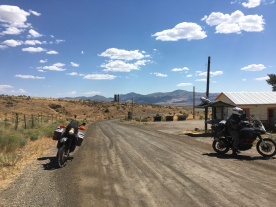 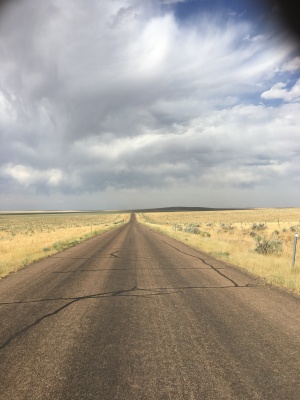 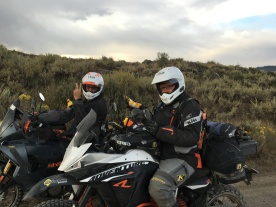 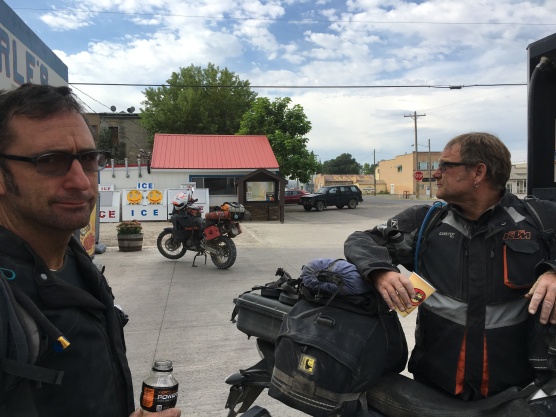 At dinner tonight in Alpine, WY we all laughed at the pictures we took this morning. There’s nothing amusing in the pictures, rather it was the absurdity of how far we rode and how long ago the morning felt. It felt like we rode for a week today…was about 400mi  started in Jackpot, NV, ended in Alpine WY. Trails and dirt roads today were the best yet.

We got an early start..it was still dark out as we hit the dirt. The scene was a bit surreal with sunrise burning what looked like clouds on fire. The sky held clouds for most of the day and I wish I’d felt more confident in our ability to make the day’s planned mileage, I’d have stopped and taken more pictures. Our aggressive schedule worked against our trip’s documentation.

Backing up to yesterday… Day 2, we started in Battle Mtn, NV, way late… Two of the four in our group were still trying to get their GPS tracks to work on their devices. We burned a bunch of time and got started riding over an hour late.. Riding was fairly easy except for a few miles of talc beds which, again, took their toll. We rode to Jackpot, on the border with Idaho and ate more than we should have at Cactus Pete’s casino. The route passed through a tiny town of Tuscarora, a cool little artist community/town of 12 people, and through Jarbidge, which had more people but felt very back-woodsy..there was gasoline in Jarbidge, not so much in Tuscorora. The gas pump there had seen better days. 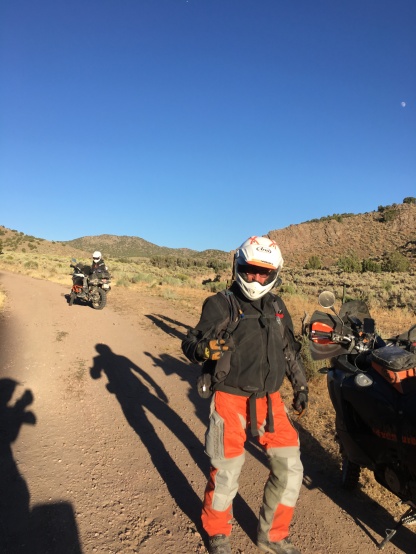 We finished day number one. Everyone is safe and sound. Just gonna start with that.

The total miles for the day were 490 which were comprised of about 180 mi from Oakland to the top to Monitor Pass at which time we began our dirt riding on Leviathan Mine road. Leviathan pretty much sucked as a ride. It is so dry out there it felt like downhilling on marbles.

The earlier post shows a few pics from the 1st half of the day. Ron’s header into the talc continued to plague him. His jacket and pants’ zippers don’t work well. At lunch he took a few minutes to continue the cleaning. Looks like it will take a real whole hearted effort later to get the dust out.

The second half of today – from Fallon to Battle Mtn was 35 miles of street and about 150 miles of dirt. We rode a lot of high speed desert floor type of stuff. (I swear I rode a straight line without touching my bars for at least 10 miles) But we also rode a couple of very nice mountain passes, through some very pretty areas with cool, higher elevation air and even some moisture in the ground.

My bike continued to exhibit (I didn’t write about it earlier) its impressive “death wobbles” at speeds over 70mph, but only sometimes.. I really should have balanced the giant Mitas rear tire. I’ve been adjusting suspension clickers but not finding any real improvements. For now, and maybe until I wear out this tire and replace it, I’ll be in a heightened state of awareness as higher speeds..

The afternoon of riding was fairly easy but things got a bit sticky as the sun set and the terrain treated us more opportunities to practice our deep-silt-rut riding. We rode well past sunset through some tricky terrain. We need a plan for the rest of the ride. Too much screwing around today. 16+ hours. More later 🙂

The morning started off with a street ride to Stockton for coffee where I got started right and dropped my bike on the ground. I should have taken a picture. Cool coffee house called Empresso. Built in an old movie theater. Corey’s bike was outfitted with a nice piece…a globe on which he marked our planned route. I’m glad we also have GPSs.

I wasn’t the only one to drop their bike so far today. Peter’s went down during a 180 in the dirt and Ron found the ground twice… The second time was spectacular, I imagine. Noone got a good look as there was too much dust to see much of anything. The silt where he went down was so deep his crash was like an afternoon swim.

The riding today so far has been a mix of asphalt and dirt. The dirt has been mostly dusty desert road stuff. Some pretty high speeds (as fast as your rear tire traction will take you). The Talc we found slowed us down a bit. I hoping we start climbing to higher elevations sooner than later. It would be nice to see something green… 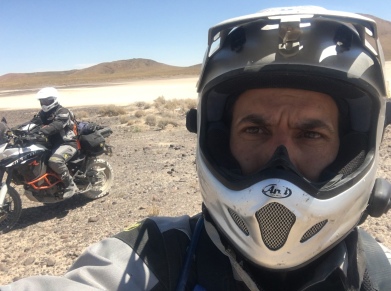 My bike is ready.

So we leave in 12 hours…(my t-18 hours math was way off). Two frantic sounding messages from Corey and from Peter just came in. GPS tracks won’t load and brakes won’t bleed. Both are kinda worth freaking out over but I can’t help from my office chair.

Finally ggot my bike ready. The giant tires make the bike much easier to get up on the center stand. Boring pictures but playing with how to use the app here.. Plus she’s quite the looker 😉

Oakland to Deadwood. When I first thought about this it seemed quite easy. A quick maps directions search shows about 1300 miles.. I’ve done more than that in a single day. How hard would it be to get some dirt miles in this and take a few extra days?